Improving the accuracy of Aquarius measurements was a key activity to ensure that the data are most useful for science and society. Scientists and engineers worked together continuously to test and refine algorithms, or step-by-step procedures for calculations, used to process Aquarius' ocean surface salinity data. The result was periodic updates to the data processing, such as Version 4 (V4).

Key processing steps that have been improved in the V4 data release are shown in bold at right. Italics show interim values calculated during the stepwise process.

Key processing steps that have been improved in the V4 data release are shown in bold below. Italics show interim values calculated during the stepwise process.

Work on processing algorithms goes hand-in-hand with calibration and validation (or "Cal/Val"). Calibration is the process of correlating instrument readings with a standard to check its accuracy. Validation occurs when the instrument's accuracy is proven; for Aquarius, this was accomplished using data from computer models and in-water buoys.

Learn All About It From Shannon Brown!

This movie features radiometer expert, Dr. Shannon Brown, who summarizes updates to the V4 algorithm since Version 3 (V3) (click the image to start). Complete with graphical information, this 20-minute video highlights key changes associated with V4, content that will be of interest to any user of Aquarius data (video transcript). 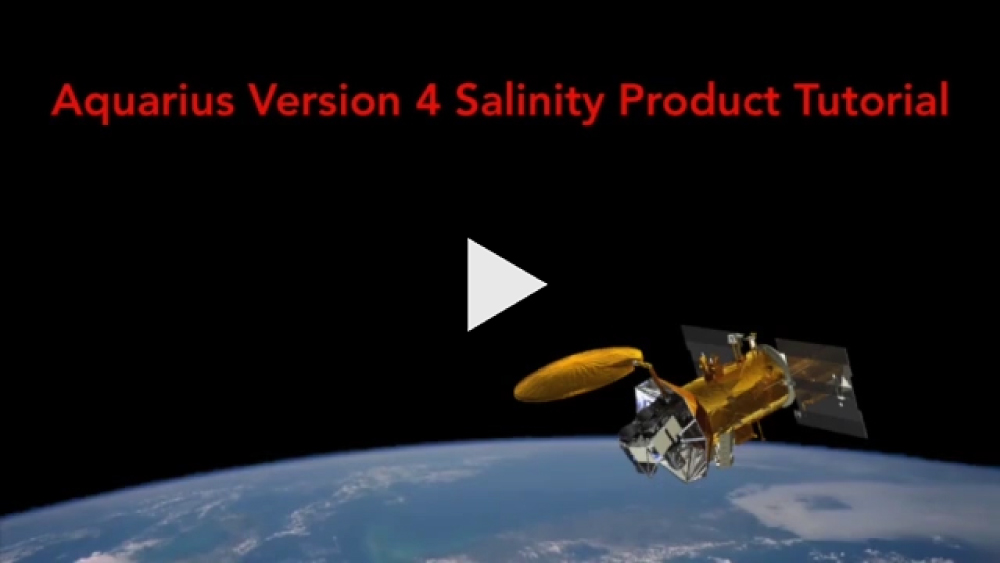 One of the other major improvements in the V4 product was explicit correction for the sea surface temperature (SST) bias that was observed in previous versions of Aquarius sea surface salinity data. For Version 3, this bias was handled through an empirically based evaluation product. For V4, this additional product was eliminated altogether. 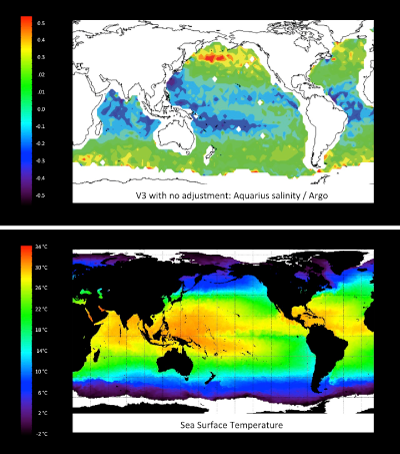 The Aquarius Cal/Val team spent considerable effort to understand the physical origin of this observed bias in salinity measurements. An important consideration was the observed correlation between regional patterns of Aquarius salinity compared to Argo floats (upper map at left) and sea surface temperature (lower map at left). Further studies showed that the bias in salinity was also dependent on wind speed. Together, these clues led the Cal/Val team to investigate three algorithms within the Aquarius data processing: the dielectric model, oxygen absorption model, and surface roughness correction model.

As indicated in the flow diagram at right, Aquarius measured Earth's brightness temperature and converted it to salinity. The dielectric model function relates the amount of brightness temperature to the concentration of dissolved salt in seawater. One processing step removed atmospheric contributions, which involves the oxygen absorption model correction. Salinity signals – detected by Aquarius as microwave energy emission – originate from the ocean and propagate through Earth's atmosphere. Comprised of about 20% oxygen, the atmosphere absorbs some of this energy and re-emits it based on air temperature. Thus to precisely calculate salinity, a perfectly tuned oxygen absorption model was needed. An even more important processing step was removing "roughness effects" caused by wind and waves on the ocean surface. The surface roughness correction model relates these data collected by the Aquarius scatterometer to brightness temperature. In general, a smoother sea surface has a lower brightness temperature than a wind-roughened ocean.

Overall, by making corrections to these models' uncertainties – as opposed to making empirical corrections to the salinity products themselves as was done in V3 – the Aquarius V4 product was more physically based. 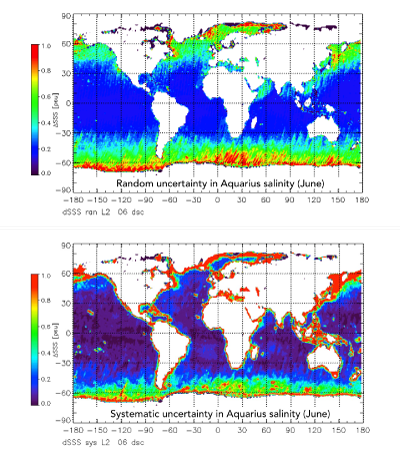 New to V4 was the addition of maps that provide users with estimates of regional uncertainties. The objective of these maps was to familiarize data users about areas where the Aquarius radiometer retrieved salinity very well (i.e., have lower uncertainty) and areas where it might have had a little bit more difficulty in doing so (i.e., have higher uncertainty). The full report (Meissner, 2015), which is available from the PO.DAAC, grouped these into random (upper map at left) and systematic (lower map at left) uncertainties.

For both random and systematic uncertainties there was a correlation with latitude. This is because the salinity signal – how much change in salinity causes a change in brightness temperature – varies with sea surface temperature (see graph). In very warm water, for example in the tropics, the Aquarius radiometer was very sensitive to sea surface salinity. In these warm ocean regions, a small change in salinity produces a much larger change in brightness temperature, which can be detected with much lower uncertainty. 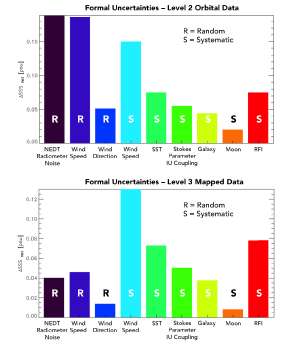 Systematic biases are high near coasts because land is very radiometrically warm compared with the ocean. Thus as the ocean salinity data collection footprint moved toward the coast, the possibility of land signal "contamination" increased. Moreover, some land regions have very high uncertainties associated with Radio Frequency Interference (RFI). RFI is human-derived electromagnetic emission produced by cell phones, walkie talkies, ground-based radars, etc. These signals interfere with salinity sensors such as Aquarius, which detect at frequencies that are supposed to be protected for radio astronomy research (1.41 Gigahertz). Given that completely filtering RFI is not possible, the Cal/Val team estimated how much is leaking through and included this information in the V4 uncertainty product.

Although not as significant as the other improvements previously described, a small correction was made to the Aquarius antenna pattern in the V4 processing. Salinity data derived from two antenna model patterns – based on a small-scale physical model and electromagnetic simulation software – were compared with salinity data from in-water floats (i.e., Argo drifter network) and a computer model (i.e., HYCOM). The Aquarius Cal/Val team found that the physical scale model produced the best agreement with the other data sets over land. The electromagnetic simulation software, on the other hand, was more accurate in terms of providing information about the mixing between vertical and horizontal polarizations of the Aquarius signal. Confirmed by data collected during Aquarius cold sky calibration maneuvers, V4 included a new hybrid antenna pattern correction. 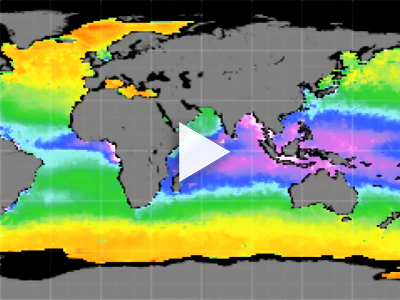 Next, ascending orbits crossed near the north pole and descended on the opposite side. Finally, it shows where ascending and descending swaths overlapped. Comparing data from these areas of overlap helped to understand how to correct for galactic reflection off the ocean surface.

V4 included a new density product, which was derived from Aquarius sea surface salinity and an ancillary SST (Reynolds Optimally Interpolated). Daily and weekly density maps can be accessed from the Aquarius Data Gallery. A time-series movie of monthly maps (at left) shows that areas of colder, saltier water have higher densities (orange colors) while in the tropics – where you have warmer, less salty water – densities are lower (purple colors). Density data (Level-2 orbital and Level-3 gridded) are available from the PO.DAAC (see box, below right).

Measuring sea surface salinity from space is very challenging, which in a sense, means calibration is an on-going process. For V5, the Aquarius Cal/Val team had a number of calibration improvements planned resulting from continued understanding of the performance of the radiometer plus fine tuning that was enabled by having almost four years of Aquarius data.

In addition, a new rain accumulation product was planned. Given that rain can temporarily decrease salinity at the sea surface, this product gives users an estimate of how much and how long ago it rained for any particular Aquarius measurement.