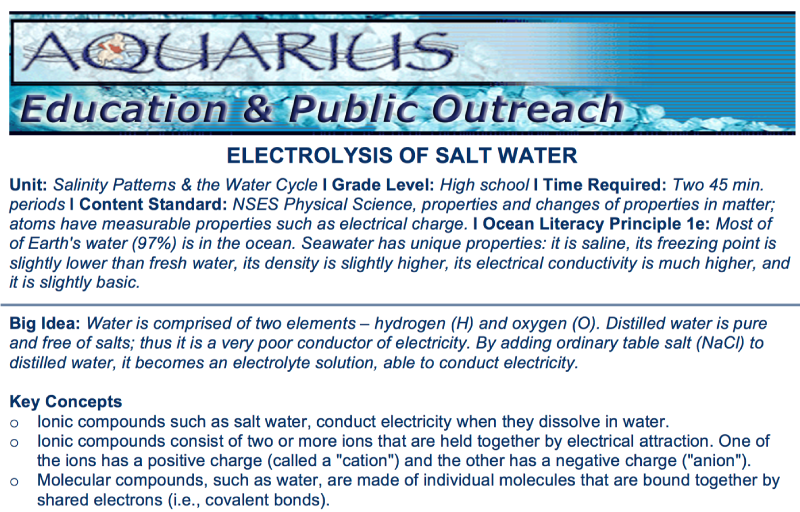 Source: NASA Aquarius
[28-Mar-14] In chemistry, electrolysis is a method of separating bonded elements and compounds by passing an electric current through them. An ionic compound, in this case salt, is dissolved with an appropriate solvent, such as water, so that its ions are available in the liquid. An electrical current is applied between a pair of inert electrodes immersed in the liquid. The negatively charged electrode is called the cathode, and the positively charged one the anode. Each electrode attracts ions which are of the opposite charge. Therefore, positively charged ions (called cations) move towards the cathode, while negatively charged ions (termed anions) move toward the anode. The energy required to separate the ions, and cause them to gather at the respective electrodes, is provided by an electrical power supply. At the probes, electrons are absorbed or release by the ions, forming a collection of the desired element or compound. One important use of electrolysis is to produce hydrogen. The reaction that occurs is: 2H20 (aq) → 2H2 (g) + O2 (g)This has been suggested as a way of shifting society towards using hydrogen as an energy carrier for powering electric motors and internal combustion engines. Electrolysis of water can be achieved in a simple hands-on project, where electricity from a battery is passed through a container of water (in practice a saltwater solution or other electrolyte will need to be used otherwise no result will be observed). Electrolysis of an aqueous solution of table salt (NaCl, or sodium choride) produces aqueous sodium hydroxide and chlorine, although usually only in minute amounts. NaCl (aq) can be reliably electrolysed to produce hydrogen. Hydrogen gas will be seen to bubble up at the cathode, and chlorine gas will bubble at the anode.