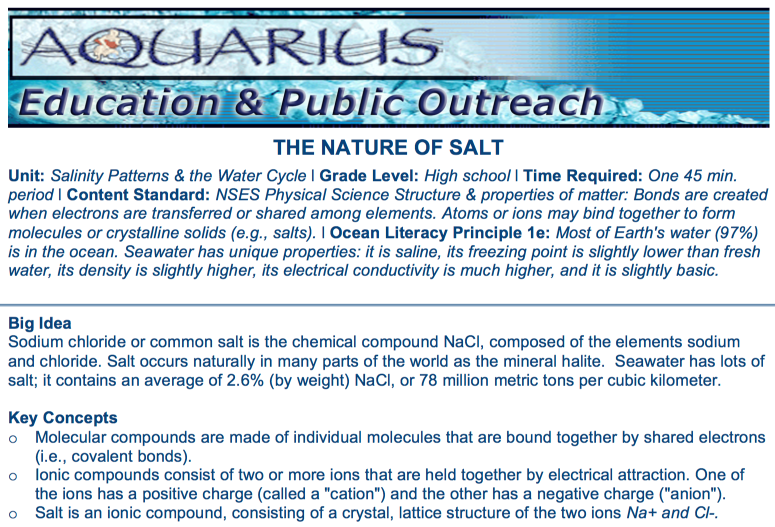 The Nature of Salt
The Nature of Salt (PDF, 1.3 MB) »
Source: NASA Aquarius
[27-Mar-2014] Chemically, table salt consists of two elements, sodium (Na) and chloride (Cl). Neither element occurs separately and free in nature, but are found bound together as the compound sodium chloride. It occurs naturally in many parts of the world as the mineral halite and as mixed evaporites in salt lakes. Seawater contains an average of 2.6% (by weight) sodium chloride, or 78 million metric tons per cubic kilometer, an inexhaustible supply. Table salt, when viewed with a magnifying glass, can be seen to consist of tiny, cube-shaped flakes. The microscope image seen at the right shows table salt crystals magnified by 100. - From The Salt Institute. Did you ever wonder why the oceans are filled with salt water instead of fresh? Just where did salt come from? And is it the same salt you find on a dining room table? Most of the salt in the oceans came from land. Over millions of years, rain, rivers, and streams have washed over rocks containing the compound sodium chloride (NaCl), and carried it into the sea. Some of the salt in the oceans comes from undersea volcanoes and hydrothermal vents. When water evaporates from the surface of the ocean, the salt is left behind. - From the Office of Naval Research.

Periodic Table; chemistry reference book or web access (optional); spheres of styrofoam, clay, etc. (some spheres should be about twice the size of others); student worksheet; toothpicks, straws, etc.
The Nature of Salt (PDF, 1.3 MB) »