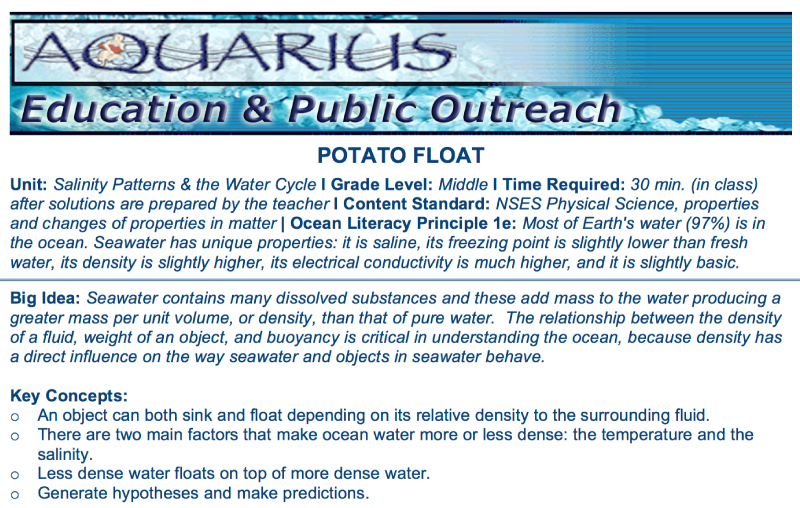 Potato Float
Potato Float (PDF, 1.4 MB) »
Source: NASA Aquarius
[28-Mar-2014] Seawater has a higher density than fresh water. Seawater contains many dissolved substances and these add mass to the water in which they are dissolved. This produces a greater mass per unit volume, or a density higher than that of pure water. The amount of salts dissolved in water is known as salinity. In waters where large amounts of suspended sediments are present, the density also increases. This is most notable in major rivers such as the Nile, Mississippi, and Amazon. In the oceans, at the junction between the continental shelves and the continental slopes, large, dense, sediment water mixtures form currents. When bodies of water with different densities contact each other, some mixing may occur, but it often occurs slowly or not at all. This can be observed where fresh water flows out into the ocean and remains on top of the denser seawater. Along ice caps and glacial margins, rivers of dense, cold water flow out and sink into the oceans relatively warmer (and therefore less dense) seawater. Many swimmers including your students, have experienced hot/cold spots in lakes and rivers where water of different density has formed. The relationship between density of fluid, weight of an object, and buoyancy is a basic concept in understanding the behavior of seawater. Students often have difficulty identifying the factors that influence whether an object sinks or floats in a liquid. When deciding whether an object sinks and floats, they consider the object's mass or volume instead of density. Different objects also have different densities, and depending on their relative densities to solutions, they will either sink or float.

Three tall beakers or glass tumblers labeled A, B, and C; water; pickling salt; spoon; knife; potato; balance; variety of smaller high-density objects (e.g., made of metal or glass) and larger low-density objects (e.g., made of wood or plastic); ruler; graduated cylinders (if beakers or tumblers do not have marked volumes); and a data sheet.
Potato Float (PDF, 1.4 MB) »