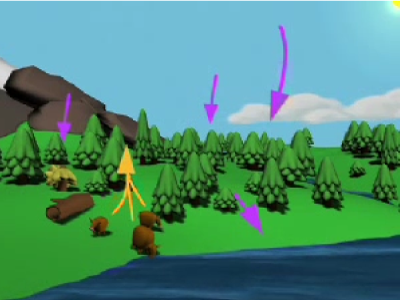 Credit: NASA/Goddard Space Flight Center/UMBC. Download this movie.
The Carbon Cycle
[06-Oct-2009] Carbon is the basic building block of life, and these unique atoms are found everywhere on Earth. Carbon makes up Earth's plants and animals, and is also stored in the ocean, the atmosphere, and the crust of the planet. A carbon atom could spend millions of years moving through Earth in a complex cycle. This conceptual animation provides an illustration of the various parts of the carbon cycle. Purple arrows indicate the uptake of carbon; yellow arrows indicate the release of carbon.On land, plants remove carbon from the atmosphere through photosynthesis. Animals eat plants and either breath out the carbon, or it moves up the food chain. When plants and animals die and decay, they transfer carbon back to the soil. Moving offshore, the ocean takes up carbon through physical and biological processes. At the ocean's surface, carbon dioxide from the atmosphere dissolves into the water. Tiny marine plants called phytoplankton use this carbon dioxide for photosynthesis. Phytoplankton are the base of the marine food web. After animals eat the plants, they breathe out the carbon or pass it up the food chain. Sometimes phytoplankton die, decompose, and are recycled in the surface waters. Phytoplankton can also sink to the bottom of the ocean, where they become buried in marine sediment. Over long time scales, this process has made the ocean floor the largest reservoir of carbon on the planet. In a process called upwelling, currents bring cold water containing carbon up to the surface. As the water warms, the carbon is then be released as a gas back into the atmosphere, continuing the carbon cycle. Carbon is found in the atmosphere as carbon dioxide, which is a greenhouse gas. Greenhouse gases act like a blanket, and trap heat in the atmosphere. In the past two centuries, humans have increased atmospheric carbon dioxide by more than 30 percent, by burning fossil-fuels and cutting down forests. (00:00:53) Credit: NASA/Goddard Space Flight Center/UMBC.Watch Movie »
Original Movie »