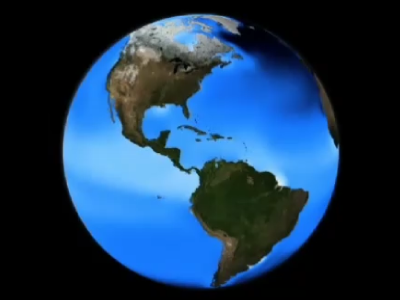 Download this movie.
Sea Surface Density
[08-Oct-09] The average density of sea surface water can be calculated from the average sea surface temperature and salinity using the state equation for seawater. This animation shows the long term average sea surface density, with light blue regions having the least density and dark blue regions having the greatest density. The sea surface density variations are actually very small, less than 3 percent overall, but the variation is very important.There are three stable, dense regions in the ocean's surface, one in the sea around Iceland, Greenland, and Scandinavia and the other two near or under major Antarctic ice shelves. In these regions, the surface water becomes dense enough to sink and join the deep ocean currents. In fact, this sinking is thought to drive these deep currents as part of a system called the Thermohaline Circulation. This circulation has a strong effect on the Earth's climate, influencing the Gulf Stream, El Niño events, and both past and future climate shifts. (00:01:00) Credit: NASA/Goddard Space Flight Center Scientific Visualization Studio.
Watch Movie