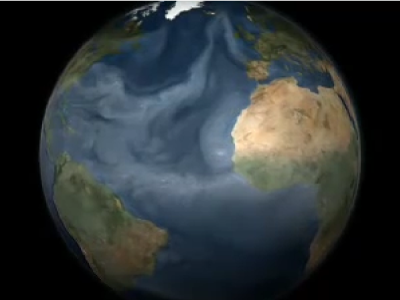 Credit: NASA/Goddard Space Flight Center. Download this movie.
Salt of the Earth: Ocean Atmosphere Circulation Helps Moderate Climate
[13-Oct-2009] Susan Lozier: "And the atmosphere and the ocean, both being fluids of the earth, really work together. We consider them sort of equal partners in the redistribution of this heat on the planet. So when those warm waters are returning, as they're moving up to the higher and higher latitudes then, they're releasing that heat to the atmosphere. Then the winds blow over the ocean, they pick up that heat and those winds over the Atlantic Ocean are moving from the North American continent to the European continent."Jeff Halverson: "It takes perhaps a thousand years for the water to cycle through the deep ocean. So we say the oceans have a memory. They're like a tape recorder. Things that happen now will still be manifest hundreds of years in the future as that cold water moves through this giant circulation."Susan Lozier: "So if there's any change to that overturning circulation, that means that Northern Europe and the British Isles would be robbed of that heat due to those waters that are returning to the high latitudes." View full movie here. (00:00:54) Credit: NASA/Goddard Space Flight Center.Watch Movie »
Original Movie »