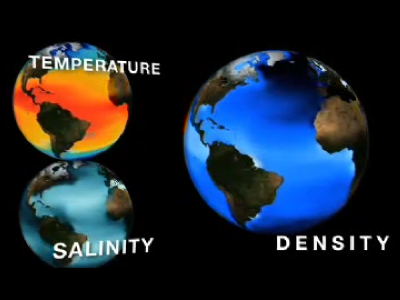 Download this movie.
Salt of the Earth: Salinity, Temperature & Density
[13-Oct-09] Susan Lozier: "And it seems a little odd in a way because salt is really a molecule in the ocean water, but collectively, that salinity plays a role in the ocean circulation."It's these differences in salinity that play a role in the processes that affect weather, climate, sea life, and the whole ocean system itself. And not all oceans have the same salinity. In fact, the North Atlantic Ocean tends to be the saltiest, much more than the Pacific.Susan Lozier: "The salt in the ocean affects its density, just like the temperature affects its density, and the density, meaning the amount mass per volume, is going to then impact where the water goes as it circulates throughout the globe."Jeff Halverson: "Differences in temperature and salt content of the water cause some areas of water to sink and some areas of water to rise. And so we tend to see the sinking water at the poles, the water rising back up at the equator, and if you connect the two together, what you have is an overturning that is deep in the ocean. It's like a big conveyor belt that operates in the ocean."This overturning moves warm water from the tropics toward the poles, and cold water from the poles toward the tropics. In this way the overturning regulates earth's climate. View full movie here. (00:01:25) Credit: NASA/Goddard Space Flight Center.
Watch Movie