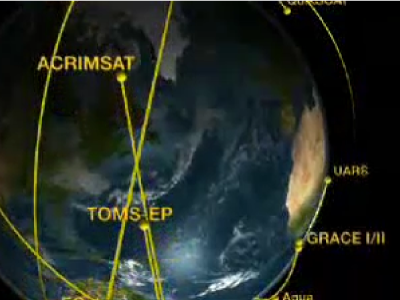 Credit: NASA. Download this movie.
Viewing Ocean Change by Satellite
[12-Feb-2010] The Earth's climate is changing... in some places, faster than predicted. Something - or someone - is cranking up the heat. And many scientists say the main culprit is us. Climate change affects almost everything on our planet - including people. But could climate change affect something as huge, as deep, as mysterious as our oceans? Earth scientists are determined to find out. Paula Bontempi: "You can see the atmosphere, you can see the land, but you can't really see beneath the ocean's surface. So you start wondering, you know, what's going on beneath the part we can see." David Adamec: "We walk in a very small part of the atmosphere, and we walk on the land. And it's how that interaction takes place with the ocean, the atmosphere, and the land that determines our quality of life. Our goal is to understand the interconnectedness of it all." For years, people have worked to unravel the mysteries of the oceans. Scientists gather data from ships and buoys on the surface, take the plunge to explore ocean depths, and fly overhead to get a bigger picture. But one of the best views of oceans might be from way, way overhead. It's the view from space. Paula Bontempi: "The one thing that NASA satellites do that nothing else does, ships or buoys or anything else, is actually give you a picture of the globe within a few days. You get a much broader view of what's going on in some part of the Earth's system, and you can link that together to understand the Earth as a whole." View full movie here. (00:01:46) Credit: NASA.Watch Movie »
Original Movie »