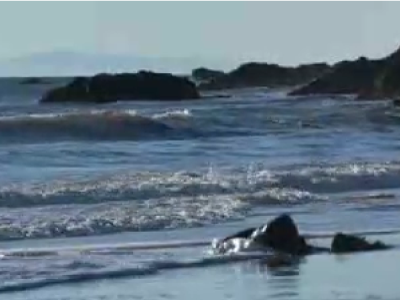 Credit: NASA/Goddard Space Flight Center. Download this movie.
Water, Water Everywhere: Sun Fuels Evaporation
[09-Oct-2009] Water is all around us, and its importance to nearly every process on earth cannot be underestimated. It is the only compound that can be found naturally as a liquid, gas, and solid. The process by which water moves around the Earth, from the ocean to the atmosphere to the land, and back to the ocean, is called the water cycle. Water regulates climate, storing heat during the day and releasing it at night, and carries heat from the tropics to the poles, by sea and by air.Let's follow a single molecule of water, beginning in the ocean, through the paths it might take before eventually winding up right where it started - back in the big blue sea. The fuel for this journey will be provided by our planet's prime energy source: the sun. During the day, the sun heats up the air and ocean surface, causing water molecules to evaporate. Evaporation occurs when a liquid molecule of water escapes into the air as a gas.This scientific visualization shows how water evaporation, indicated in turquoise, is driven by the energy of the sun. Notice how the rate of evaporation pulses over land: it speeds up during the day and almost disappears at night. Over the ocean, evaporation appears to remain constant, both day and night. Water in the air in gas form is known as water vapor. The molecule is now fresh water, having left the ocean salt and other particles behind. View full movie here. (00:02:00) Credit: NASA/Goddard Space Flight Center.Watch Movie »
Original Movie »