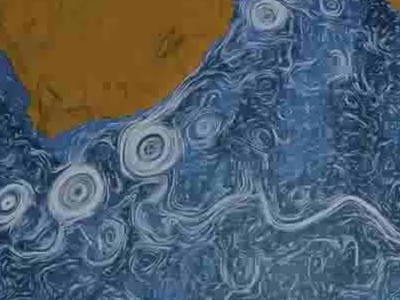 Credit: NASA. Download this movie.
Perpetual Ocean
[29-Mar-2012] Driven by wind and other forces, currents on the ocean surface cover our planet. Some span hundreds to thousands of miles across vast ocean basins in well-defined flows. Others are confined to particular regions and form slow-moving, circular pools. Seen from space, the circulating waters offer a study in both chaos and order. This visualization, based on ocean temperature, salinity, sea surface height and sea ice data collected during field observations and by NASA satellites between July 2005 and December 2007, highlights many of the world's most important ocean surface currents. Watch powerful, fast-moving currents like the Gulf Stream in the Atlantic Ocean and the Kuroshio in the Pacific Ocean carry warm waters northeastward at speeds greater than 4 mph. View coastal currents such as the Agulhas in the Southern Hemisphere transporting equatorial waters from the Indian Ocean farther southwards. Explore the image collection to compare the direction and unique flow pattern of each of these major currents. (00:03:02) Credit: NASA.Watch Movie »
Original Movie »