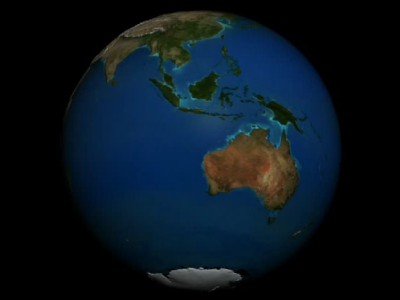 Download this movie.
Aquarius Sea Surface Salinity Tour 2012 (English Language)
[20-Feb-13] The Aquarius spacecraft was designed to measure global sea surface salinity. It is important to understand salinity, the amount of dissolved salts in water, because it gives us a better understanding of the water cycle, and can lead to improved climate models. Aquarius was a collaboration between NASA and the Space Agency of Argentina.This visualization celebrates over a year of successful Aquarius observations. Sea surface salinity is shown at various locations around the globe highlighting the following: The range of time shown is December 2011 through Decemeber 2012. The data continuously loop through this range every 6 seconds. This visualization was generated based on version 2.0 of the Aquarius data products with all 3 scanning beams. (00:03:17) Credit: NASA's Goddard Space Flight Center Scientific Visualization Studio. View
Watch Movie