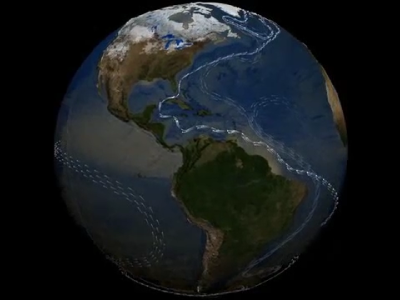 Credit: NASA/Goddard Space Flight Center Scientific Visualization Studio. Download this movie.
Thermohaline Circulation Using Improved Flow Field
[14-Nov-2011] The oceans are mostly composed of warm salty water near the surface over cold, less salty water in the ocean depths. These two regions don't mix except in certain special areas. The ocean currents, the movement of the ocean in the surface layer, are driven primarily by the wind. In certain areas near the polar oceans, the colder surface water also gets saltier due to evaporation or sea ice formation. In these regions, the surface water becomes dense enough to sink to the ocean depths. This pumping of surface water into the deep ocean forces the deep water to move horizontally until it can find an area on the world where it can rise back to the surface and close the current loop. This usually occurs in the equatorial ocean, mostly in the Pacific and Indian Oceans. This very large, slow current is called the thermohaline circulation because it is caused by temperature and salinity (haline) variations.This animation shows one of the major regions where this pumping occurs, the North Atlantic Ocean around Greenland, Iceland, and the North Sea. The surface ocean current brings new water to this region from the South Atlantic via the Gulf Stream and the water returns to the South Atlantic via the North Atlantic Deep Water current. The continual influx of warm water into the North Atlantic polar ocean keeps the regions around Iceland and southern Greenland generally free of sea ice year round.The animation also shows another feature of the global ocean circulation: the Antarctic Circumpolar Current. The region around latitude 60 south is the only part of the Earth where the ocean can flow all the way around the world with no obstruction by land. As a result, both the surface and deep waters flow from west to east around Antarctica. This circumpolar motion links the world's oceans and allows the deep water circulation from the Atlantic to rise in the Indian and Pacific Oceans, thereby closing the surface circulation with the northward flow in the Atlantic.The color on the world's ocean's at the beginning of this animation represents surface water density, with dark regions being most dense and light regions being least dense (see the animation Sea Surface Temperature, Salinity and Density). The depths of the oceans are highly exaggerated (100x in oceans, 20x on land) to better illustrate the differences between the surface flows and deep water flows. The actual flows in this model are based on current theories of the thermohaline circulation rather than actual data. The thermohaline circulation is a very slow moving current that can be difficult to distinguish from general ocean circulation. Therefore, it is difficult to measure or simulate.This version of the visualization combines the Earth look of the original thermohaline visualization with the new thermohaline flow field generated for the Science on a Sphere production, "Loop". (00:02:46) Credit: NASA/Goddard Space Flight Center Scientific Visualization Studio.Watch Movie »
Original Movie »