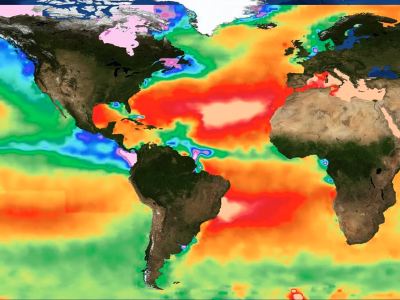 Credit: NASA/JPL and Rana Fine. Download this movie.
Ocean Alkalinity, 2011 to 2015
[06-Nov-2015] To document effects of ocean acidification it is important to have an understanding of the processes and parameters that influence alkalinity. Alkalinity is a measure of the ability of seawater to neutralize acids.This visualization shows monthly surface total alkalinity (TA) from August 2011 to May 2015 as derived using data from NASA's Aquarius mission. Utilization of Aquarius data allows unprecedented global mapping of surface TA as it correlates strongly with salinity and to a lesser extent with temperature.For the first time, Aquarius data are allowing scientists to observe changes in surface alkalinity over time. For example, they have found that the Northern Hemisphere has more spatial and monthly variability in total alkalinity and salinity, while less variability in Southern Ocean alkalinity is due to less salinity variability and upwelling of waters enriched in alkalinity. Increasing surface TA in subtropical regions from increasing salinity and temperature causes the saturation states of calcite and aragonite to decrease, i.e., enhanced dissolution. Thus, based on increasing TA in the subtropical regions over the past few decades, it is expected that it is becoming more difficult for calcifying organisms to make their shells. (00:00:07) Credit: NASA/JPL and Rana Fine.Watch Movie »
Original Movie »