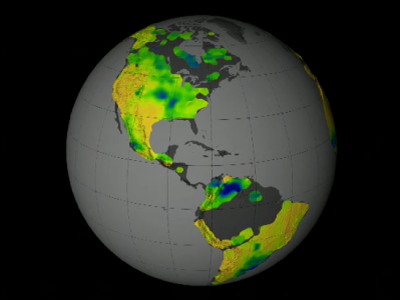 Credit: NASA’s Goddard Space Flight Center. Download this movie.
Aquarius Soil Moisture (Narrated)
[07-Jul-2014] NASA's Aquarius instrument has returned its first global maps of soil moisture. And these new maps reveal how the moisture in the soil responds to the changing seasons and weather phenomena.The Aquarius instrument flies aboard the Aquarius/SAC-D satellite, which launched in June 2011. This satellite was built by NASA and Argentina's space agency, with a primary objective of measuring the salt concentration of the ocean surface. Within the same year it was launched, the satellite produced its first global maps of sea surface salinity.In addition to salinity, scientists also developed a method to use Aquarius to monitor moisture in the first two inches of soil. Soil moisture is the water contained within the spaces of air between soil particles. The amount of water in the soil can vary due to drought, floods, irrigation and changes in rainfall. Soil moisture measurements have many uses, from improving weather forecasts and climate models to refining drought and flood predictions. Observations made be Aquarius will be used to fine-tune soil moisture measurements made by NASA's SMAP satellite, which is scheduled to launch later this year. (00:01:31) Credit: NASA’s Goddard Space Flight Center.Watch Movie »
Original Movie »