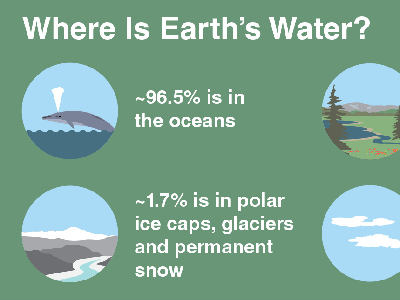 Credit: NASA Climate Kids.
Where is the Water on Earth?
[15-Jul-2018] Viewed from space, one of the most striking features of our home planet is the water, in both liquid and frozen forms, that covers approximately 75% of the Earth's surface. Geologic evidence suggests that large amounts of water have likely flowed on Earth for the past 3.8 billion yearsmost of its existence. Believed to have initially arrived on the surface through the emissions of ancient volcanoes, water is a vital substance that sets the Earth apart from the rest of the planets in our solar system. In particular, water appears to be a necessary ingredient for the development and nourishment of life. Water is practically everywhere on Earth. Moreover, it is the only known substance that can naturally exist as a gas, a liquid, and solid within the relatively small range of air temperatures and pressures found at the Earth's surface. In all, the Earth's water content is about 1.39 billion cubic kilometers (331 million cubic miles), with the bulk of it, about 96.5%, being in the global oceans. As for the rest, approximately 1.7% is stored in the polar icecaps, glaciers, and permanent snow, and another 1.7% is stored in groundwater, lakes, rivers, streams, and soil. Only a thousandth of 1% of the water on Earth exists as water vapor in the atmosphere.