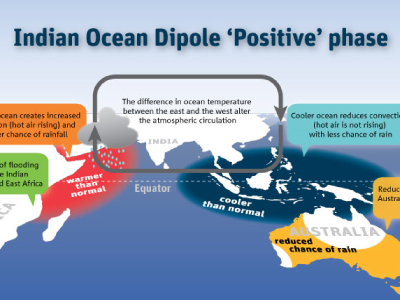 Credit: CSIRO.
Indian Ocean Dipole "Positive" Phase
[29-Nov-2013] A phenomenon in the Indian Ocean that affects events in southeast Australia is helping to predict extreme weather up to six months in advance. This phenomenon, the Indian Ocean Dipole, is the difference in sea-surface temperatures between the western and eastern part of the Indian Ocean, and until recently has been one of the most influential but the least understood natural forces affecting Australia's climate. Read more here.