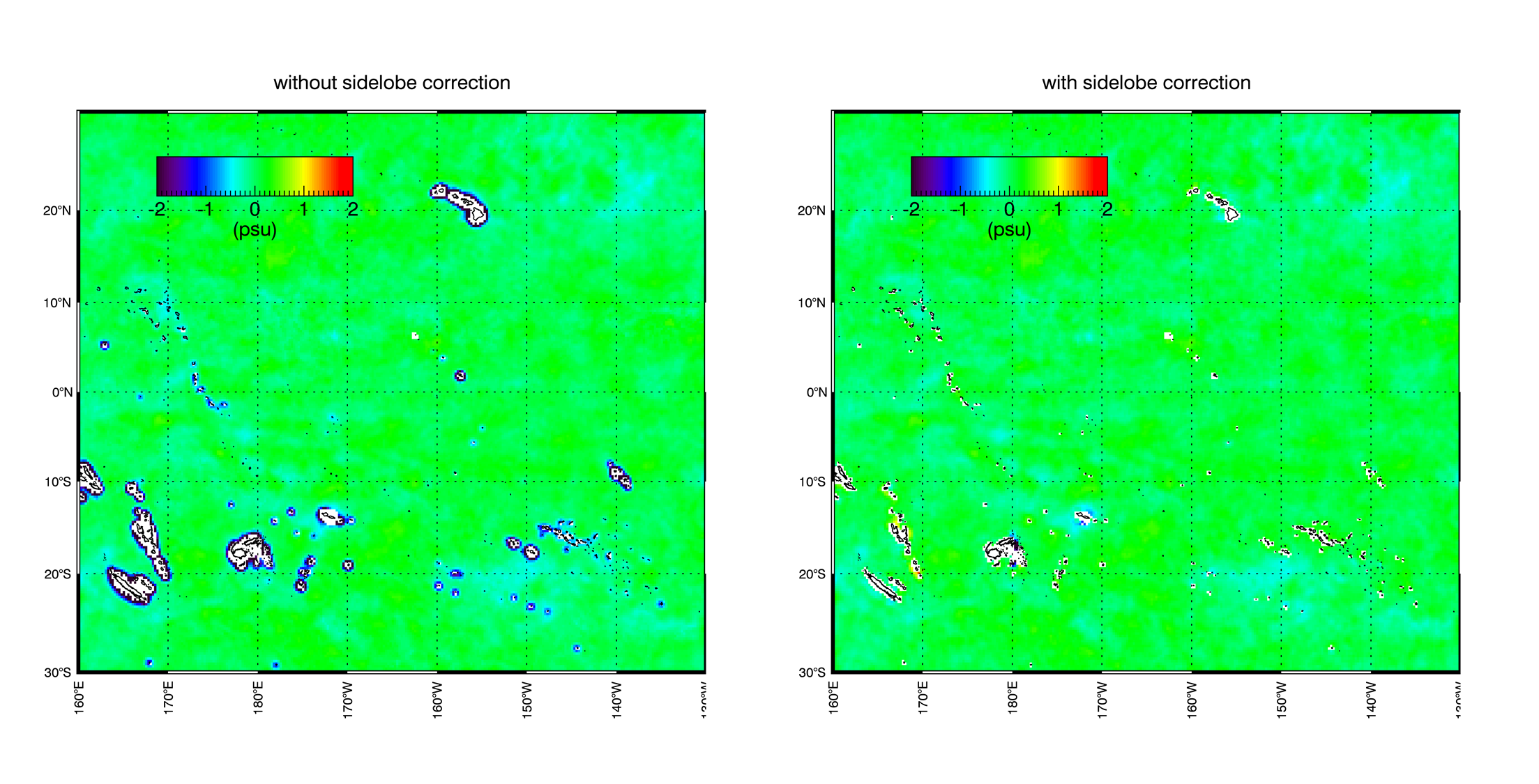 Improved SMAP Salinity Retrievals in Coastal Areas and Near the Sea-Ice Edge
[18-Feb-20] Meissner, T., Wentz, F.J., Manaster, A., Vazquez, J., Grodsky, S., and Kao, H-Y.
Presented at the 2020 Ocean Sciences MeetingThe NASA/RSS SMAP Salinity Version 4 was publicly released in August 2019. The main feature and upgrade from prior releases is a much improved antenna sidelobe correction for intrusion from land surfaces. The sidelobe correction is derived by running an orbit simulator that computes the SMAP brightness temperature (TB) of ocean scenes in coastal areas using a radiative transfer model and performs a full integration over the SMAP antenna gain pattern. The computation simulates SMAP TB, which includes radiation from adjacent land surfaces that enter the SMAP antenna sidelobes. The difference between this simulated TB and the uncontaminated TB for a given ocean scene is a measure of the land contamination. This can be used in the SMAP salinity retrieval algorithm to remove the spurious land contribution. In order to be sufficiently accurate, Version 4 performs this computation on a very fine grid with a spatial resolution of 12.5 km. In addition, the computation of the land surface emission in Version 4 is based on actual SMAP TB measurements over land. Prior releases used a surface emission model, which was found to give inaccurate results in many cases. The improvements to the land correction in Version 4 make it possible to retrieve SMAP salinity with sufficient accuracy within 30-40 km of the coast. We present validation results including comparisons with global Argo floats, sail-drone measurements near Baja California, and moored buoys in the Gulf of Maine area. The attached figure shows SMAP versus ARGO salinity near island in the Pacific first without sidelobe correction with evident land contamination and then after applying the correction removing most of the contamination. Improving salinity retrievals near the sea-ice edge is an ongoing effort. The goal is to allow SMAP salinity retrievals closer to the ice-edge, however, the low sensitivity of the SMAP measurements to salinity in cold water make this very challenging. We are developing a sidelobe correction for contamination from sea-ice very similar to the one for land correction. In order to do this, it is necessary to have a very accurate map for sea-ice fraction, which is dynamically changing. Various sea-ice products are being tested for this purpose.