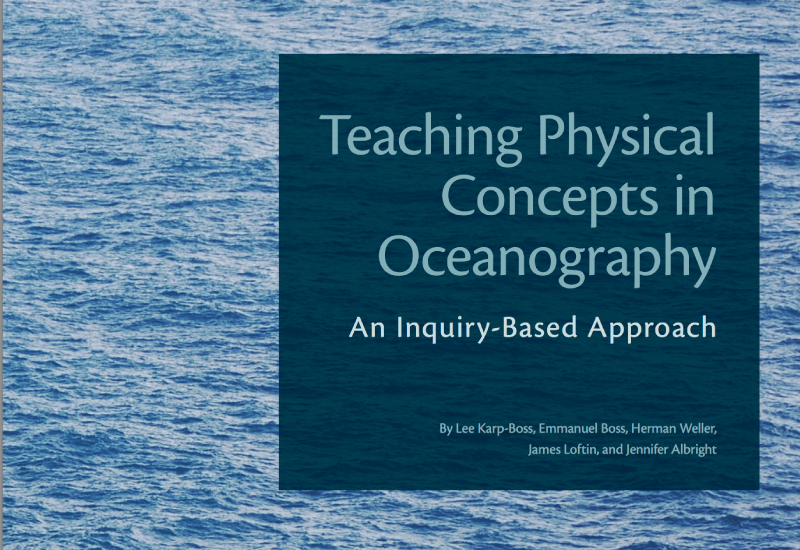 Convection Under Ice
Convection Under Ice (PDF, 27.0 MB) »
Source: NASA Aquarius
[23-Feb-2010] Activity 1.6: Convection Under Ice (p. 10; click here for videos accompanying this activity). In oceanography, density is used to characterize and follow water masses as a means to study ocean circulation. Many processes are caused by or reflect differences in the densities of adjacent water masses or differences in densities between fluids and solids. Plate tectonics and ocean basin formation, deep-water formation and thermohaline circulation, and carbon transport by particles sinking from surface waters to depth are a few examples of density-driven processes. This activity is designed to highlight links to oceanic processes.In the left panel in Fig. 1.6 (page 10 in the booklet), an ice block floats in tap water because the density of ice is lower than that of freshwater. As the ice melts, however, cold, colored meltwater sinks to the bottom because it is denser than the tap water. Warmer water from the bottom is then displaced and upwells, resulting in a convective flow visible in the dye patterns. Ice melting in the center of the tank is analogous to a convection "chimney" formed in the open ocean, while ice melting at the tank's edge is analogous to a chimney on a continental shelf (near a land mass). Such chimneys in the ocean, created and sustained by convective processes, appear as "columns" of mixed water that flow downwards. For a given set of oceanic and meteorological conditions, open-water convection tends to entrain (mix with) more of the surrounding waters than does convection near a land mass. The open-ocean case therefore results in downwelled water that is less dense.In the right panel of Fig. 1.6 (page 10 in the booklet), the ice block floats in dense, salty water. As the ice melts, only a small amount of dye sinks because the density of the saltwater is greater than the density of the newly melted, fresh, ice-cold water. Most of the meltwater accumulates in a surface layer on top of the denser salt layer. Read the Background section (p. 4-5) of Chapter 1 (Density) in preparation for this activity.Note: Even though this experiment focuses on temperature only, it can be used to discuss how salinity, like temperature, affects the density of ocean water. This resource is one part of a larger collection (Teaching Physical Concepts in Oceanography: An Inquiry Based Approach) that "uses educational approaches to help engage students in learning and offers a collection of hands-on/minds-on activities for teaching physical concepts that are fundamental in oceanography". Source: Teaching Physical Concepts in Oceanography: An Inquiry Based Approach, Oceanography 22(3), Supplement, 48 pp.
Convection Under Ice (PDF, 27.0 MB) »