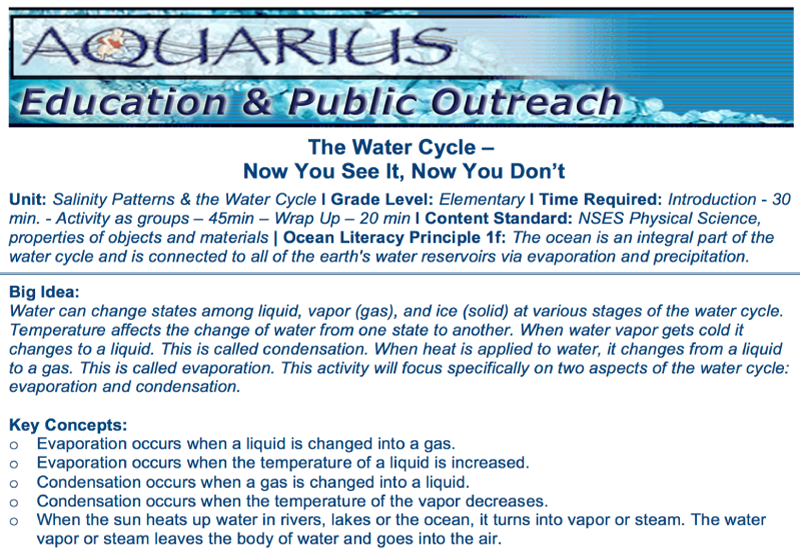 The Water Cycle - Now You See It, Now You Don’t
The Water Cycle - Now You See It, Now You Don’t (PDF, 1.5 MB) »
Source: NASA Aquarius
[12-Feb-2010] The water cycle has no starting point. But we'll begin in the oceans, since that is where most of the Earth's water exists. The sun, which drives the water cycle, heats water in the oceans. Some of it evaporates as vapor into the air. Ice and snow can sublimate directly into water vapor. Rising air currents take the vapor up into the atmosphere, along with water from evapotranspiration, which is water transpired from plants and evaporated from the soil. The vapor rises into the air where cooler temperatures causes it to condese into clouds. Air currents move clouds around the globe, cloud particles collide, grow, and fall out of the sky as precipitation. Some precipitation falls as snow and can accumulate as ice caps and glaciers, which can store frozen water for thousands of years. Snowpacks in warmer climates often thaw and melt when spring arrives, and the melted water flows overland as snowmelt. Most precipitation falls back into the oceans or onto land, where, due to gravity, the precipitation flows over the ground as surface runoff. A portion of runoff enters rivers in valleys in the landscape, with streamflow moving water towards the oceans. Runoff, and groundwater seepage, accumulate and are stored as freshwater in lakes. Not all runoff flows into rivers, though. Much of it soaks into the ground as infiltration. Evaporation drives the water cycle. Evaporation from the oceans is the primary mechanism supporting the surface-to-atmosphere portion of the water cycle. After all, the large surface area of the oceans (over 70% of the Earth's surface is covered by the oceans) provides the opportunity for such large-scale evporation to occur. On a global scale, the amount of water evaporating is about the same as the amount of water delivered to the Earth as precipitation. This does vary geographically, though. Evaporation is more prevalent over the oceans than precipitation, while over the land, precipitation routinely exceeds evaporation. Most of the water that evaporates from the oceans falls back into the oceans as precipitation. Only about 10% of the water evaporated from the oceans is transported over land and falls as precipitation. Once evaporated, a water molecule spends about 10 days in the air. The process of evaporation is so great that without precipitation, runoff, and discharge from aquifers, oceans would become nearly empty over time. Condensation is the process by which water vapor in the air is changed into liquid water. Condensation is crucial to the water cycle because it is responsible for the formation of clouds. These clouds may produce precipitation, which is the primary route for water to return to the Earth's surface within the water cycle. Condensation is the opposite of evaporation. You don't have to look at something as far away as a cloud to notice condensation. Condensation is responsible for ground-level fog, for your glasses fogging up when you go from outside on a cold winter day and to inside a warm room, for the water that drips off the outside of your glass of iced tea, and for the water on the inside of the windows in your home on a cold day.