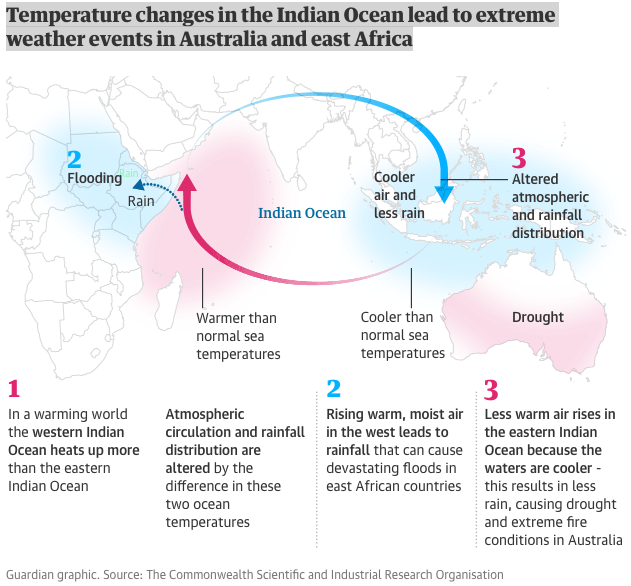 Alt Tag: Indian Ocean Dipole diagram.
Description: Global heating is "supercharging" an increasingly dangerous climate mechanism in the Indian Ocean that has played a role in disasters this year including bushfires in Australia and floods in Africa.

Scientists and humanitarian officials say this year's record Indian Ocean dipole, as the phenomenon is known, threatens to reappear more regularly and in a more extreme form as sea surface temperatures rise. Of most concern are years in which the sea surface off the coast of Africa warms up, provoking increased rains, while temperatures off Australia fall, leading to drier weather. It is similar to El Niño and La Niña in the Pacific, which cause sharp changes in weather patterns on both sides of the ocean. Caroline Ummenhofer, a scientist at Woods Hole Oceanographic Institution in Massachusetts who has been a key figure in efforts to understand the importance of the dipole, said unique factors were at play in the Indian Ocean compared with other tropical regions. Read more here. Credit: CSIRO.